The topic of a recent private (and very brief) correspondence concerned (Immanuel) Velikovsky and (Julian) Jaynes. The former is famous for his Worlds in Collision (1950), the latter for Origins of Consciousness in the Breakdown of the Bicameral Mind (1976). Velikovsky’s is a work of speculative cosmology, while Jaynes’ one of speculative psychology, i.e., the claims of both concern, respectively, cosmological and psychological developments in the relatively distant past. And what’s of importance here is that both take their initial impulse from ancient texts. For example, Velikovsky refers to the Long Day of Joshua (Joshua 10: 12-15) and Jaynes to the poet’s invocations of the Muse at the beginning of the Iliad. 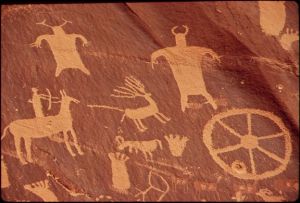 appeal made since the dawn of the modern UFO era (post-1947) in support of the claim that UFOs have been, in fact, a constant in human history. For example, Desmond Leslie in the book he wrote with George Adamski Flying Saucers Have Landed published soon after Velikovsky’s Worlds in Collision eschews the freshly-minted expression ‘flying saucer’, preferring “to use the ancient names for the sky disks such as ‘car celestial’, ‘vimanas’, and ‘fiery chariots'” (14). Ancient Astronaut “theorists” refer also to ancient art, seeing there depictions of flying saucers and extraterrestrials.

All such argumentative moves make the same questionable assumption, that premodern texts and art are universally representational. This assumption is not utterly unfounded:  Heinrich Schliemann’s taking Homer at his word resulted in his making important archeological discoveries (though it remains debatable that he in fact discovered the Troy of the Iliad),

and it was precisely the strikingly realistic manner of the then newly-discovered cave paintings of Altamira that gave an impulse to the visual arts at the beginning of last century, most famously perhaps in the work of Picasso. On the other hand, I’m unaware of any paleontologists inspired by the Odyssey to search for the remains of the Cyclops nor does anyone, to my knowledge, believe The Sorcerer of Les Trois-Frères to be a realistically-depicted humanoid. Indeed, this interpretive move parallels “literal” readings of the Bible that support the belief in the reality of a global inundation in the distant, mythological past. All these hermeneutics (interpretive approaches) err in the roughly the same way:  they project a historically, culturally, and socially local communicative convention (namely, one of our own) onto human textual and artistic production in general.

As the examples of the Cyclops and The Sorcerer of Les Trois-Frères should make clear, premodern texts and art cannot legitimately in general be understood as merely distorted or embellished representations of historical events. Such a representational use of media is historically and culturally local, to us. Moreover, the very notion that language can be said to represent a ready-made world (as in the picture theory of meaning in Ludwig Wittgenstein’s Tractatus Logico-Philosophicus) or that it should, as admonished by Francis Bacon in his inaugurating the Scientific Revolution, is itself a notion that has undergone a devastating critique from the perspectives both of philosophy (e.g., Novalis’ “Monologue”) and linguistics (e.g., the Whorf-Sapir Hypothesis). Any attempt to enlist any not explicitly representational text as evidence must always undergo the philological labour of establishing the linguistic conventions that underwrite the meaning of that particular text in order to claim to have understood it all in the first place. And since this hermeneutic task is a historical one, undertaken by interpreters of a particular time to understand a text produced in a distant place and time, it is open-ended, always unfinished, perennially open to revision. These are the lessons of what philosophers term “the hermeneutic circle” and “the linguistic turn”, whether one takes this latter to have begun after the Great War or the French Revolution.

The error of taking all linguistic and artistic media in the same way, projecting our own practice onto the entirety of humanity in all times and places, finds its analogue in the prejudices evident in the Extraterrestrial Hypothesis (ETH), as I have been at pains to make clear in several posts, most recently in regards to the example of Donald Keyhoe. The difference between the crimes-against-interpretation sketched above and the errors of the ETH is one of scale:  the linguistico-artistic error restricts itself to human cultural production, while the ETH projects an anthropocentric and culturally, historically, and socially restricted notion of intelligence onto all life in the universe.

I am a scholar and poet based in Montreal, Canada, where I teach in the English Department of Dawson College. View all posts by Bryan Sentes

6 thoughts on “Ancient Astronauts, the Linguistic Turn, and the Hermeneutic Circle”